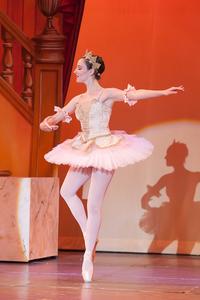 Kathryn began her early training at the Beck Center for the Arts in Lakewood, Ohio, under the direction of Melanie Szucs. She continued her training at Ohio Dance Theatre (Oberlin, OH) with Janet Strukely-Dziak and at summer intensives with Cincinnati Ballet. As a student at Mercyhurst University’s Dance Department, she had the opportunity to work with artists such as Tauna Hunter, Lesley Bories-Scalise, Melissa Bobick, Amanda Edge, and Rick McCullough. Kathryn spent her summers training with Bruce Marks, Peter Stark, Deidre Carberry, Melissa Bowman, and Raymond Lukens at the Next Generation Ballet, ABT Austin, and ABT Collegiate intensive programs. She has performed in ballets such as The Sleeping Beauty (Aurora), Pas de Quatre, Valse Fantaisie, La Fille Mal Gardée, Paquita, and The Nutcracker, as well as modern works like Jose Limon’s Waldstein Sonata during her college career. Kathryn was also chosen to perform in an ensemble at the NYC Finals for the YAGP competition in 2012 and in the NYCDA Destiny Rising Gala at the Joyce Theater in 2014 with Mercyhurst Ballet Theatre. In addition, she was one of two dancers from the Mercyhurst Dance Department offered an apprentice contract with the Liaoning Ballet of China. Kathryn began her professional career as a founding member of the new Cleveland Ballet, where she worked with artists such as Gladisa Guadalupe, Cynthia Graham, and Ramon Ollér in his new production of Coppélia. She is now a company member at Lake Erie Ballet, under the direction of Lesley Bories-Scalise, where she will perform in The Nutcracker as the Snow Queen in mid-December.